Lions Clubs around the globe recognize outstanding members with an award named after our founder, Melvin Jones. The Melvin Jones Award is the highest recognition a Lions Club member can receive.  On August 22 the Pendleton Lions Club bestowed this award on long time Lion Virginia Jones for her embodiment of the Lions motto of "We Serve." 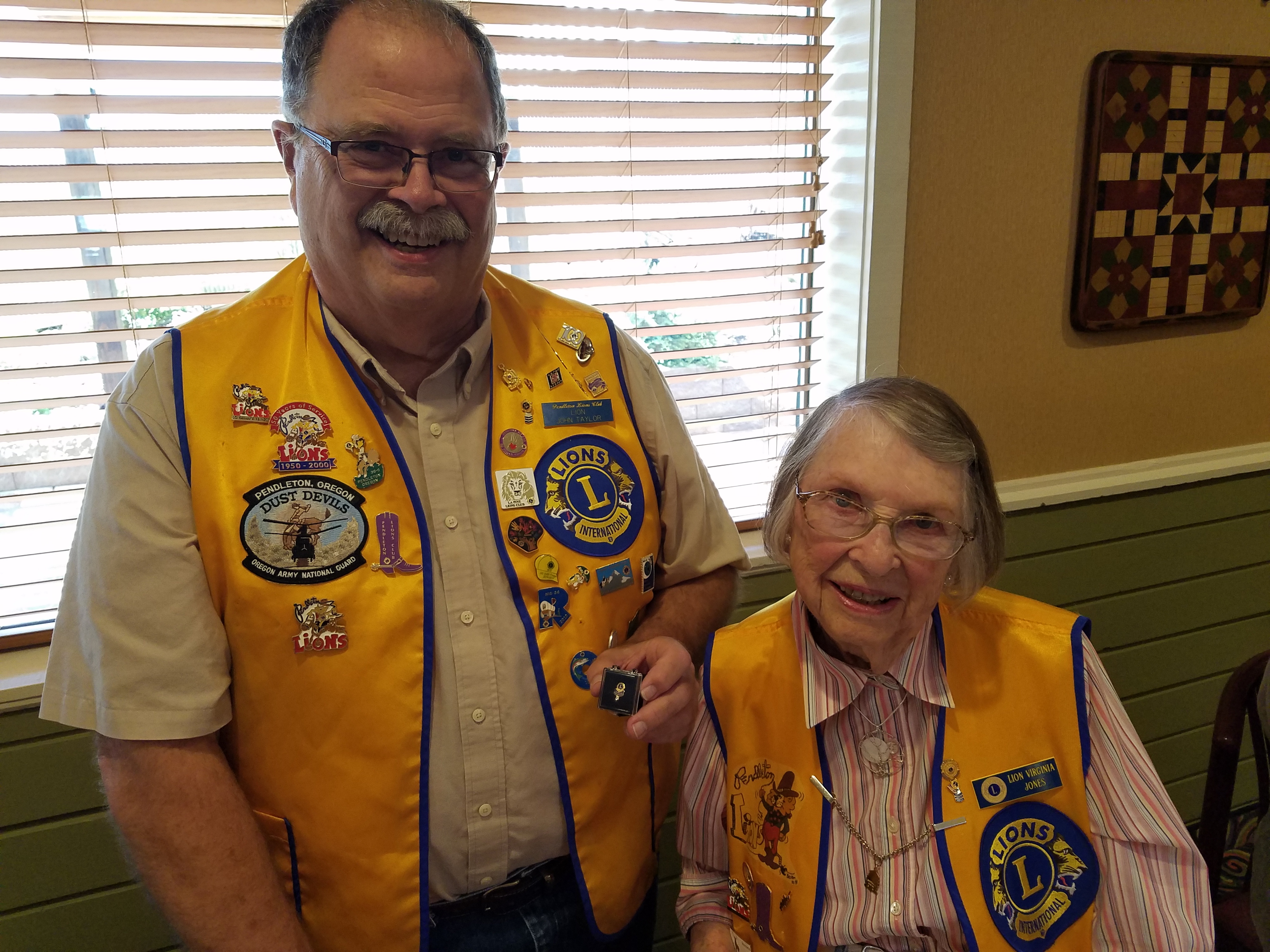 Unknown to her fellow club members, this was the second Melvin Jones Award that Lion Virginia had received. In 1993 her previous club, the Pilot Rock Lions, also recognized her with this award. We are proud to count Lion Virginia as a member of the Pendleton Lions!

The Pendleton Lions own Jan Stewart was inducted into the Oregon Lions Sight and Hearing Foundation's Hall of Fame at this year's State Convention held May 3 and 4 at Seaside, Oregon. Lion Jan worked for approximately 12 years as secretary for the foundation, which provides significant vision and hearing support for those who cannot otherwise afford it. "Imagine being in a large room with Lions from the entire state (and some from outside of our state) and having your name called for such an award," said Lion Jan. "It was a very humbling moment." 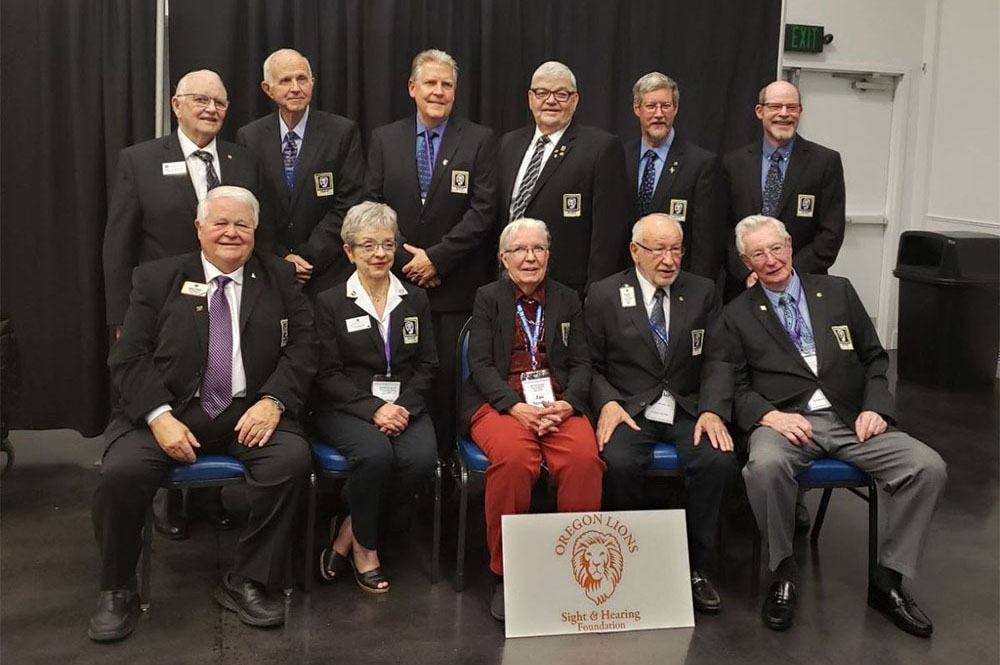 Lions Jan and Bill are seated 3rd and 4th from left

Lion Jan was preceded in the Hall of Fame by her husband, Lion Bill Taylor. Lion Bill was inducted in 2015 after many years of involvement with OLSHF activities, including serving as Vice President and President of the foundation.

On January 12 the Pendleton Lions conducted a food drive for the Outreach Food Pantry at Pendleton's Grocery Outlet store. Lions collected 1654 pounds of food that were delivered to the food pantry. In addition Lions received $175 in donations that were also given to Outreach. 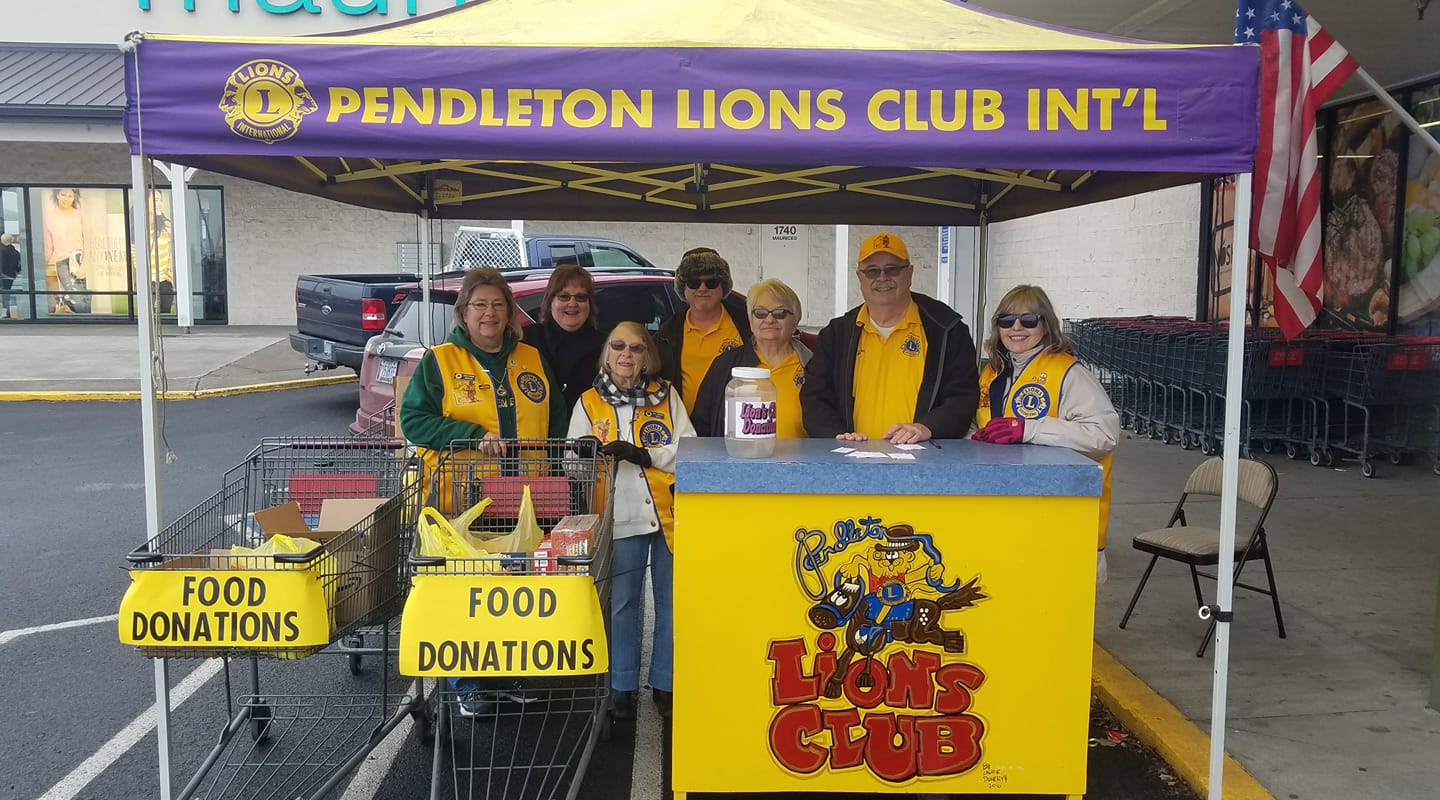 The Pendleton Lions Club thanks all those generous shoppers who donated to the food drive!

On October 31th, the Pendleton Parks and Recreation Department planted six new Honey Locust trees purchased by the Pendleton Lions Club in the Riverfront Plaza adjacent to Southwest Court Avenue. The plaza provides access to the river parkway and is also the location of Pendleton's beautiful Blue Heron statue. 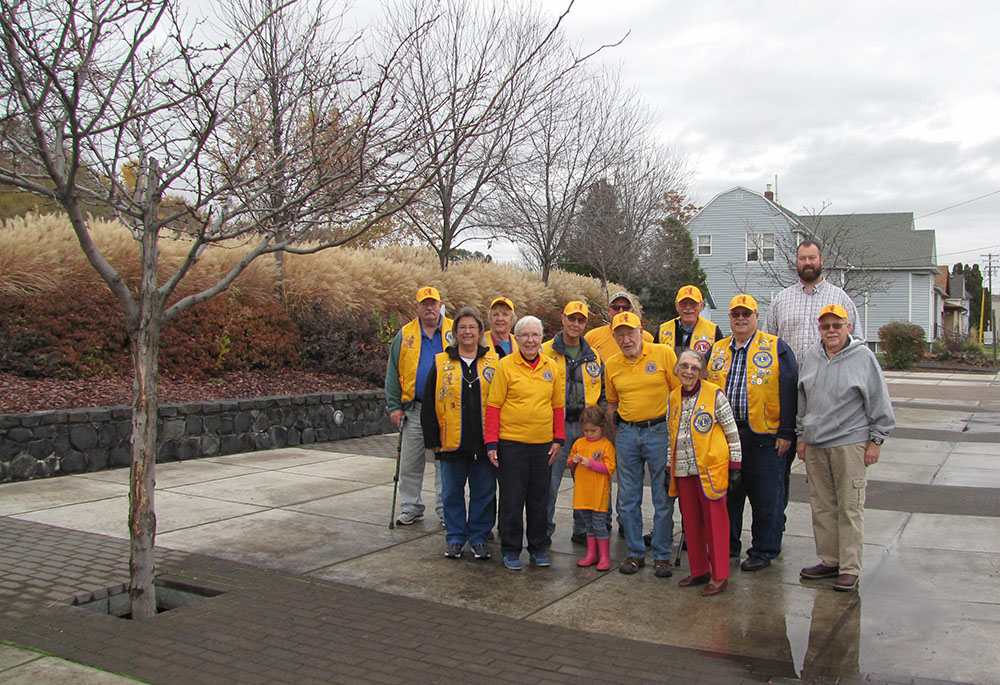 The Honey Locusts replace trees that were killed in a hard early winter freeze several years ago. The Honey Locust is well adapted to Pendleton's weather patterns and these trees should be enjoyed by parkway visitors for many years to come.

On October 11th, The Oregon Lions Sight and Hearing Foundation presented Pendleton Lion Jon Spilker with the Helen Keller Benefactor award in recognition of his long term humanitarian contributions to the sight and hearing conservation of Pendleton area residents. Helen Keller stated "Will you not help me hasten the day when there shall be no preventable blindness; no little, deaf, blind child untaught; no blind man or woman unaided?" As chairman of the Pendleton Lions Club Sight and Hearing committee, Jon has tirelessly worked to provide vision assistance to those in need. 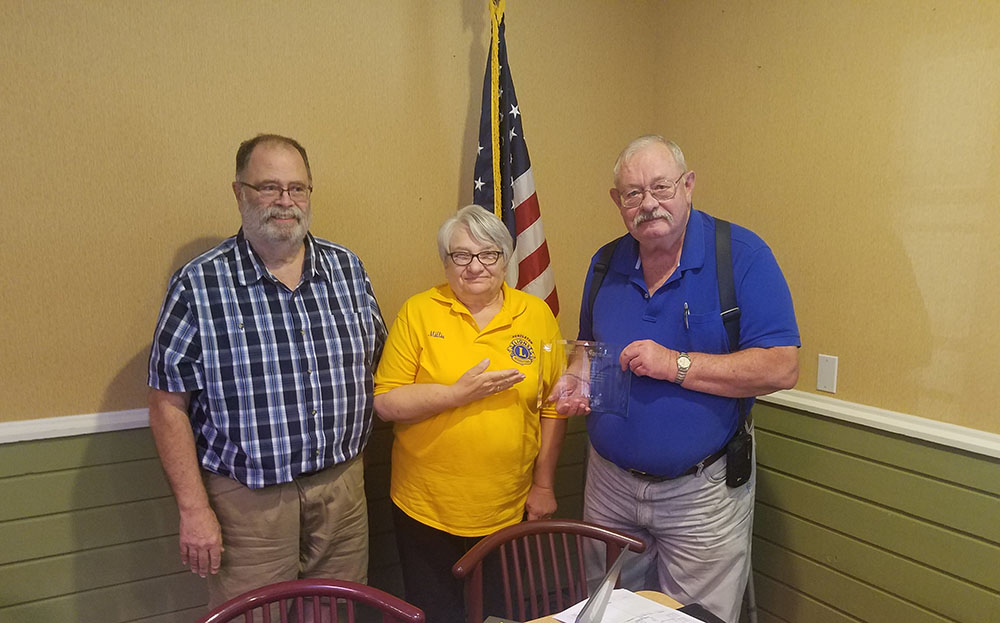 Many local folks may have seen Jon at Round-Up selling seat cushions, remember him organizing the serving of the BMCC Christmas Dinner, collecting food at a food drive, or working at many other Lions projects to raise money for eye exams and glasses. The Lions motto is "We Serve!" and Jon exemplifies that spirit of service!

Following their October board meeting, members of the Pendleton Lions Club recognized Buckn' Bean Coffee by presenting owner Kirbie Hill with a plaque thanking the business for its support to Lions over the years.  Kirbie was not expecting to see all those Lions that morning and had to be called out of the kitchen. As usual she was busy taking care of her customer orders. 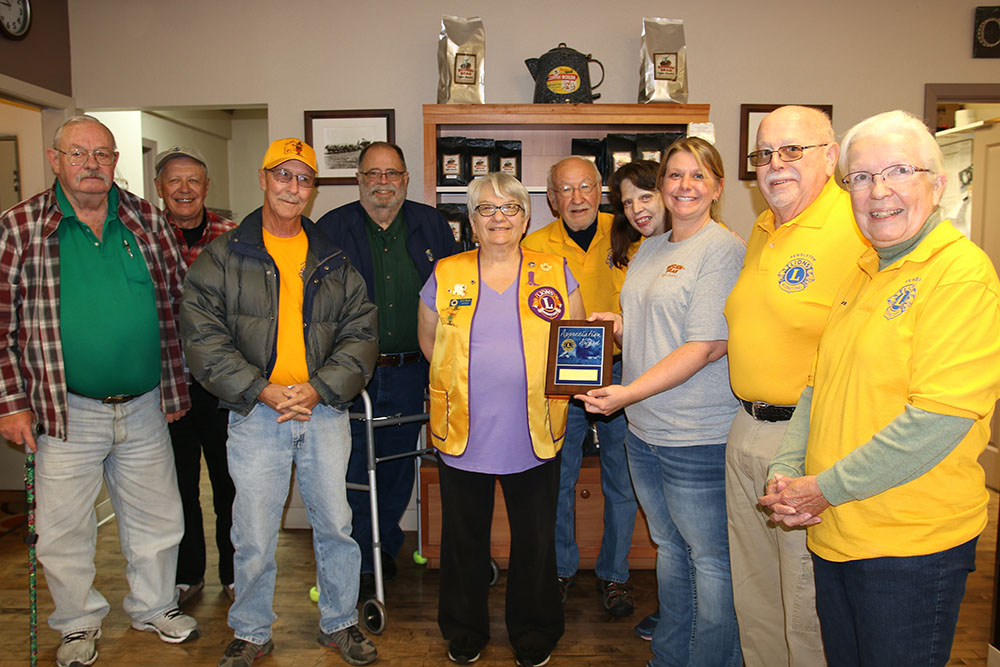 Kirbie and her husband Winston startedBuckn' Bean Roastersin 2012 after moving back to Oregon from southeast Alaska.  Since that time the business has flourished.  Winston and Kirbie roast a variety of coffee types and do internet sales along with the shop.

The Buckn' Bean has always provided the Lions with a welcome place to conduct committee meetings.  Planning for the Radio Auction, Round Up concession and many other Pendleton Lions programs often occur at a Saturday morning "Meeting at the Bean."  In addition, Winston and Kirbie have generously donated coffee to the Lions Radio Auction.  Being civic minded, they have also supported other worthy causes in our community, including thePendleton Warming Station.

The plaque expresses our appreciation for Winston and Kirbie's continued support of the Pendleton Lions Club." 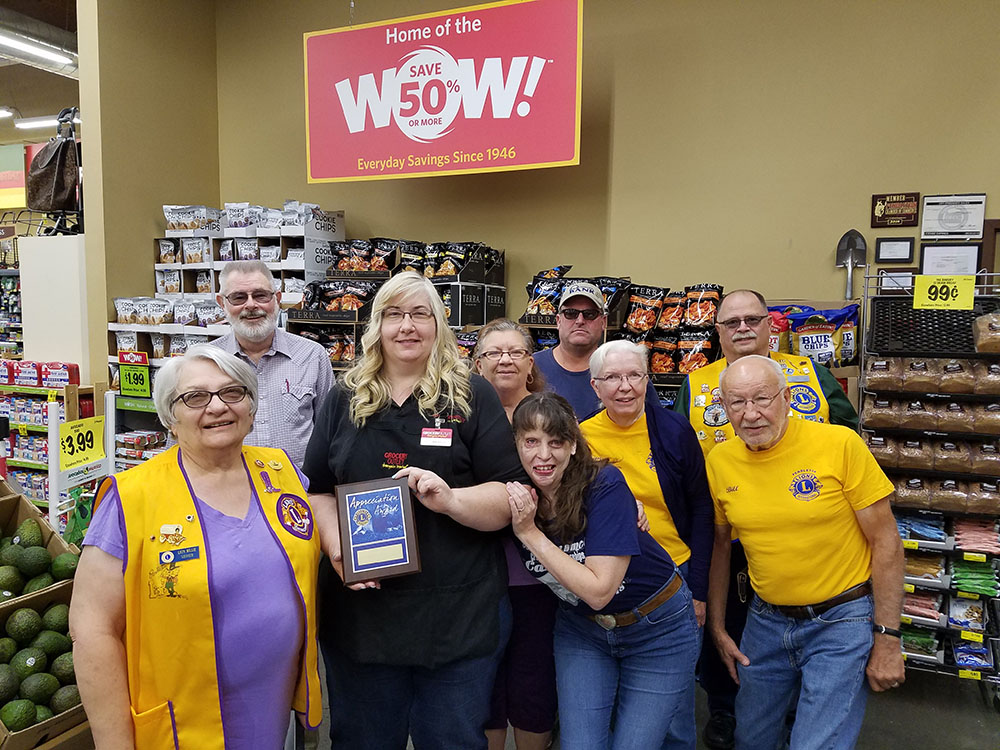 Dan and Jamie Canale, owners of Grocery Outlet in Pendleton, are strong supporters of their community, which is reflected in their partnership with the Lions to fight hunger in our area. Not only do they allow the Lions to set up periodic donation stations at the front door, they also donate a significant amount of food themselves and provide other ways for shoppers to give.

Unfortunately, the Canales were enjoying a rare day off before the mayhem of Round-Up when the Lions showed up to honor their store. The Lions thank the Canales and Grocery Outlet employees for their commitment to ending hunger in our community.

The plaque reads: "Presented in sincere appreciation to Dan and Jamie Canale and Grocery Outlet for your support of the Pendleton Lions Club Food Drives."

Lions to Provide Trees for Parkway

At the August Board meeting, Lions voted to provide $1000 top the Pendleton Parks and Recreation Department to purchase trees to plant near the plaza providing access to the levee parkway near Northwest 4th Street. 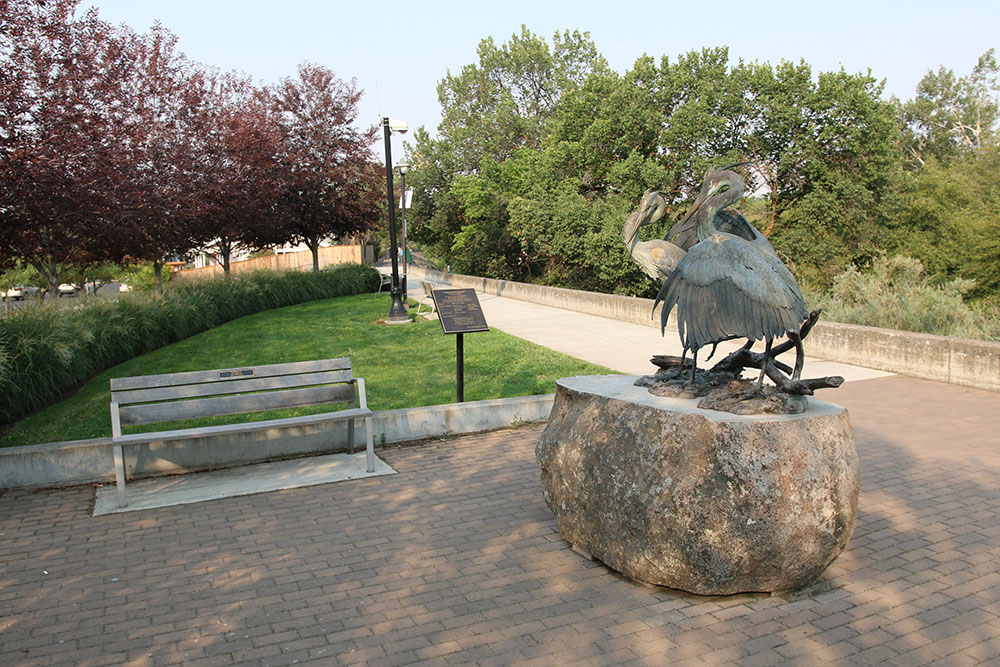 Providing trees for Pendleton area parks has been an ongoing activity of the Pendleton Lions. Trees provided by the Lions can by enjoyed at Grecian Heights park and Pioneer park.

At the August Board meeting, Lions Randee Bronson and Dwight Johnson received the coveted Melvin Jones Award for humanitarian efforts. The Melvin Jones award is named after the founder of Lions International. Clubs that donate $1000 to the Lions International Foundation may honor a local Lion whose efforts have significantly contributed to the humanitarian efforts of Lions.

Lion Randee is the manager of Pendleton's branch of Community Bank.  Lion Randee is on the Board of Directors and has coordinated many successful programs, including the Pendleton Round-Up concession, BMCC Cruisn' for Scholarships concession, Food Drives and Lions Radio Auction.  Lion Dwight has served as Pendleton Lions Club Treasurer for over ten years.  Lion John Taylor, himself a Melvin Jones Fellow, presented the awards.

The Pendleton Lions Club was presented the "Silver Sparky Award" at the annual meeting of the State Fire Marshalls Association in Bend on March 22. The award is given annually to a person or organization for efforts in fire prevention and safety. The Lions received this award because of their joint efforts with the Pendleton Fire Department in providing smoke alarms to residents of Pendleton. A picture of the award and more information on the program may be found on ourSmoke Alarm Programpage.

Lions Donate $300 to Showers for Flowers

The Pendleton Lions Club Board of directors has voted to give the Pendleton Downtown Association $300 to help with their showers for flowers program. The Lions felt that this worthy program, which pays for the watering of the beautiful hanging flower containers on Main Street, is consistent with the club mission of supporting our community. 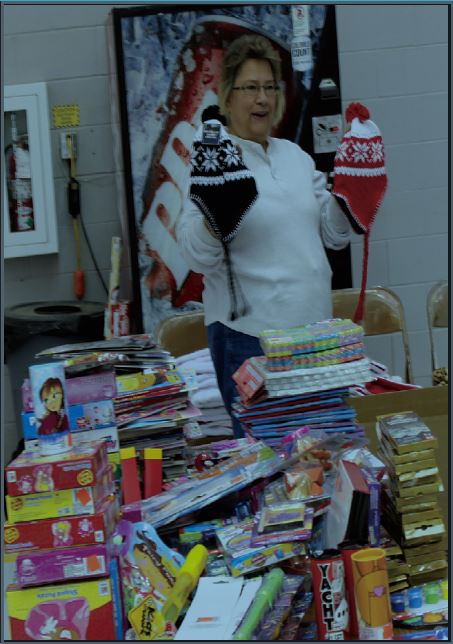